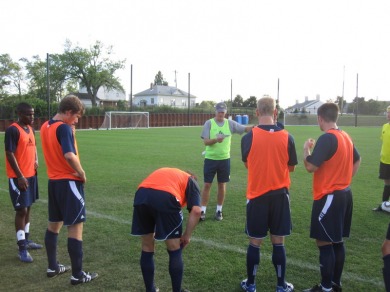 I was able to make it down to the new UM Soccer Complex for a preseason practice. As I approached the team was in a huddle, Coach Burns talking team tactics before moving into a modified full sided scrimmage. The team was working on their defensive tactics.

On the field you could see all the players trying to make a mark. Two-a-day practices had been going on for a few days but they were still fighting hard. There was obvious frustration when players were taken off the field for a break.

Watching the players move the ball was exciting. Their passing was incredible, both on short and long balls. There were also several points when individuals would try and show their dribbling skills and did quite a bit to impress.

There were also plenty of shots on goal, proving our offensive and goaltending strengths. Several blasts were sent from long range as well as some great passing leading to one on one chances.

At the end of the practice session, the team did core work. Following it, Coach Burns challenged the team to beat Snape in Around the World, a juggling challenge where you have to go around the body starting from a foot to the same knee same shoulder head and down the other side and back, to avoid doing more core exercises. The team chose Cam to face off, and by just an instant Cam pulled it off.

After practice ended, Coach Grassie gave me a tour of the almost complete stadium. Walking on the grass I felt a rush of excitement. Some of the lines drawn and the goals in place gave me a picture of what the season will hopefully bring. I pictured fans lining the Ultras sideline and locals packing the opposite stands all joining in with the cheers.

In conversation with Grassie, I asked him about the stadium and the team. Although the stadium is currently done, there is still possibility to expand, explained Grassie. Athletic Director David Brandon has said depending on how the team does, there is possibility to expand the structure to include soccer offices and futsal courts at the field, part of the original dream design for the complex.

When asked about the team, Grassie was very enthusiastic. There were some who got away for reasons outside of the team's control, but the group we got is very strong. He also went on to say that this team is probably the best he has seen take the field at Michigan.

From my observations and Grassie's comments, it looks like it will be a promising season. Upcoming events include games on Wednesday, September 1st against Detroit and Friday, September 3rd against Drake. There will be a lot of big things going on for the Drake game including give aways and busses coming directly from the pep rally. Make sure to come out for both.

For more pictures check out the Photo Gallery.
For more info about upcoming games look at the UM Soccer Website.